Reaching out and touching someone since 1996

Reaching out and touching someone since 1996

How I spent my summer vacation Labor Day weekend

What with the Labor Day weekend and all, we had the oh-so-original notion to take the kids on one last road trip to herald the end of summer. Wanting to travel relatively close to home, Cancun, Hawaii and Disney World were all out. Fortunately, we live within a couple-hour drive of some of the most exciting world-class tourist destinations in the, um, world.

First up was the Newport Aquarium. Oops. Not only does everyone else have the same idea for Labor Day weekend, so does the town of Newport itself, seeing as it's the weekend they hold their big festival, complete with closed roads and cramped parking. Um, no thanks. What else ya got?

So with a trip to the Cincinnati metropolitan area inching lower and lower on the list, we instead settled on a trip to Guntown Mountain in picturesque Cave City, Kentucky. Mammoth Cave is the big draw in this area, but like any tourist trap, a mini-industry of tchotchke stores and other spend-yer-dollars-here attractions populate the area. We don't need no stinkin' Mammoth Cave.

From what I can discern, Guntown Mountain used to be more than it is. Apparently it used to be some kind of real amusement park with rides and all. Today, it's a replica Old West town, with a gunfight show, a can-can show, a magic show, and some other gunfight show. Yep. Nothing says Old West like south-central Kentucky. 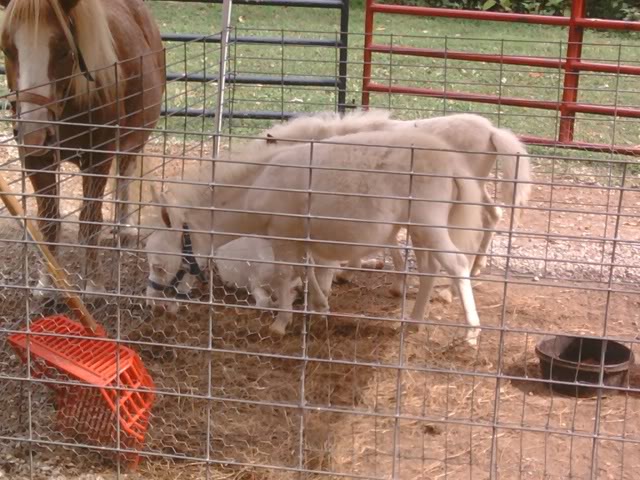 The rides may be gone, but at least they still have the petting zoo. I didn't actually pet anything, mind you. But it was there, complete with pigs, goats, turkeys (I don't think you're supposed to pet those) and some miniature horses that one is admonished to absolutely not pet because they will bite. Still, it was interesting to see this albino miniature horse thing.

Without question, though, the absolute best part of Guntown Mountain was the chairlift. See, Guntown Mountain, while not strictly a mountain, is at the top of a very large hill, accessible only by chairlift or shuttle bus. Who the hell wants to ride a bus where there's a freakin' chairlift?! I haven't been on a chairlift since I went skiing back in college, and it was a first for the missus and kids. And it was enough of a thrill that we went back just to ride it up and back down again. Way cool. Plus, the view from the top ain't bad either.

Not content to limit ourselves to a single attraction, across the street is Dinosaur World. You can tell some care goes into creating this as a family-friendly attraction, and I can attest to the thrills the little tykes all around were getting. Unfortunately, our brood is getting to the age where large fiberglass extinct monsters aren't quite as thrilling, so a good chunk of this park was breezed through in a less than thrilling manner. (Mainly because we weren't thrilled to pay that much to spend so little time.) Still, as pedestrian as the life-size dinosaurs were, I think they make for some decent photos, if only to pretend you were snapping the real thing from the safety of the roped-off path.

After hitting Dinosaur World, we started moving up the strip. If you've ever been to Orlando with its myriad of T-shirt shops and souvenir stalls, this was like that, only slightly less dense and with more confederate flags for sale. And biggest souvenir shop of them all (biggest in Kentucky goes the legend) was Big Mike's. 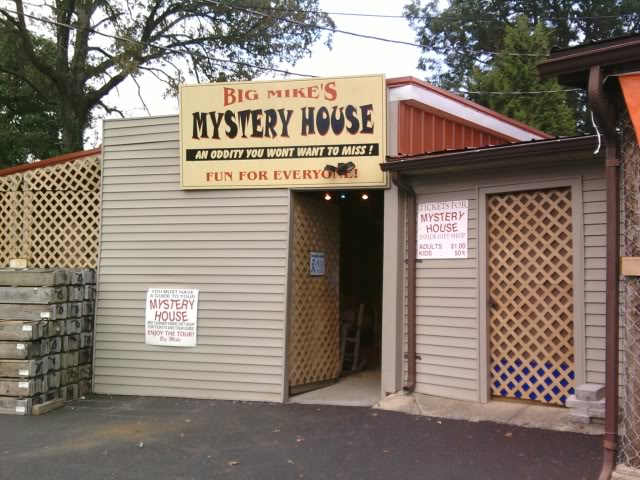 The store itself was underwhelming (how many geodes and onyx chunks can one look at anyway?) but fortunately, there was the Mystery House. I was a little apprehensive this would be a variation on The Thing?, but fortunately, not so. I don't want to spoil the mystery (no, seriously, I don't) but I will say it was by far the best bang for our buck — literally. I wouldn't drive two hours out of my way to go back, but if I was passing by, I'd definitely make a detour. It was that fun.

No day trip is complete without dinner in a restaurant you've never been to before. We stopped at Toot's in Bowling Green, Kentucky. It's a chain, apparently, but one we've never heard of. It seemed to be Hooters without the hooters. The wings weren't bad and I did chow down on the leftover Saratoga chips the next day. So thumbs up, I guess.

Sadly, it seems trips like this aren't likely to happen much anymore. The kids are getting too old for the traditional family-fun type outings. The day cost us a couple hundred and it doesn't seem the kids were wowed all that much. Personally, I had a blast, though. Um... the end.