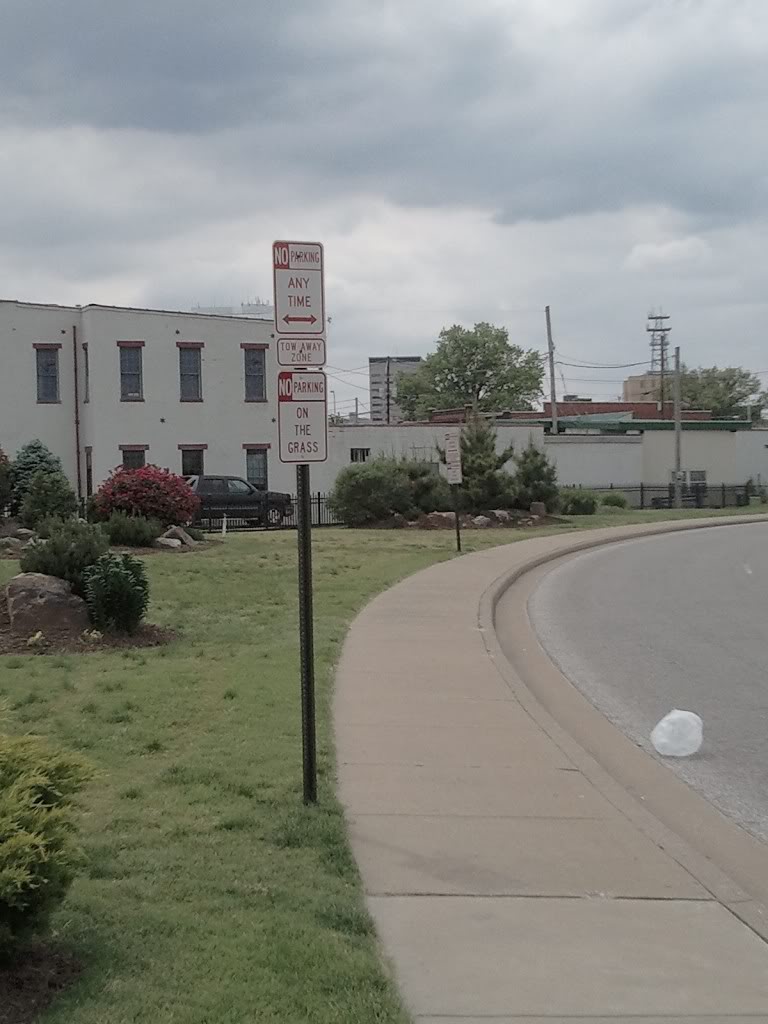 Is this really a problem?

I was walking back from lunch the other day, and this sign caught my attention. Enough so I didn't even see the trash blowing along my view while snapping the pic.

Another piece of Pie

So last night we went to the movies, which is a rare enough occasion as it is, but we went to the 10:30 showing, which means we were out at about 1 AM. Clearly, I'm not as young as I once was, because today's been a little rough.
Posted April 7, 2012 at 11:04 AM by Michael
Read More

The rewards of being a railfan

Despite some high winds, we had some terrific weather Sunday, so we took a drive out to Dogtown where we like to stop under the trestle because trains pass by there every thirty to sixty minutes (or more frequently).
Posted November 15, 2011 at 7:11 AM by Michael
Read More

Worst experience at a Ford venue since Lincoln

Last week the missus and I went to see Reba McEntire, plus Eden's Edge, Steel Magnolia and The Band Perry. (Of those three, I'm only familiar with Steel Magnolia, because we watched them win season 2 of Can You Duet?.) She's a big fan of Reba, and while I very much enjoyed the sitcom, I have only a passing familiarity with the music. Nonetheless, I was eager since I've never been to a country concert before.
Posted November 14, 2011 at 2:11 PM by Michael
Read More

Its funny how our tastes change as we get older. Like most kids going trick-or-treating, there were certain candies I dreaded getting, chief among them peanut butter kisses (you know, those nondescript things in black and orange wax paper wrappers), Bit O' Honey, Mary Janes, and anything licorice. And that was okay, because Dad would make that great parenting sacrifice and eat that stuff for me. Now, as a parent, I make that mighty sacrifice myself and consume the licorice and peanut butter kisses the kids bring home. Yum.
Posted October 18, 2011 at 6:10 AM by Michael
Read More

Wow, it's already been over two weeks since Labor Day and I still haven't gotten around to posting the photos from our latest outing. Maybe it doesn't feel pressing since we did the same thing we did two years ago. The difference this year, though, is we knew what to expect.
Posted September 19, 2011 at 10:09 AM by Michael
Read More

I have a bill to pay. At my old job, we had a postal meter, so I could "buy" stamps from the company; as such, we never keep stamps at home anymore. Now that I no longer have that option, I have to buy a stamp the old-fashioned way.
Posted August 10, 2011 at 6:08 AM by Michael
Read More

So a couple weeks ago, Netflix announced a change in pricing, whereby the DVDs-by-mail and streaming services would be split into separate entities. Those (like us) who used the one-DVD-plus-streaming service would be required to pay $7.99 for one DVD at a time, and another $7.99 for unlimited streaming. Understandably, this has caused quite the online brouhaha.
Posted July 31, 2011 at 8:07 PM by Michael
Read More