Growing up, whenever someone asked where the name Itzoe came from, the general response was "It's French. It used to be spelled Itzoet and pronounced Ee-tsway" but the reality is no one really knew. Back in the Nineties my brother started doing geneological research. He was able to trace family back to Europe, but not to specific locations. However, a couple years ago, we found the town of Itzehoe, Germany. Having heard stories of non-English-speaking turn-of-the-century immigrants from Europe being assigned new names based on either their native land or whatever word the immigration official picked out from their native tongue, Itzehoe seems the best (and at this point only) candidate thus far. Summary: we're probably German. To boot, much of my wife's family is also German.

With this in mind, I've been slowly embracing German culture in the past several years. As a kid I was never a huge fan of German food what with all its saur vinegar and all. As I got older I started eating things like German potato salad and German fries and — yum — bratwurst. And it fascinates me that so many of our (meaning America's) Christmas traditions come from Germany.

Our area of the state has a very high concentration of German heritage. Many of the towns have German names, more have German architecture, and for heaven's sake we even have the German American Bancorp. With all this in mind, yesterday we travelled to Ferdinand for their annual Christkindlmarkt.

In short, a Christkindlmarkt is a traditional German Christmas festival featuring food, music, beer and wine, and merchants selling all kinds of antiques, crafts and baked goods. I understand Chicago has a pretty big one every year. The Christkindlmarkt is a big deal in Ferdinand, and the town goes all out, with decorations, thousands of visitors, and shuttle buses to all the markts. It was indeed very festive, with the added bonus that it was sunny and 65°, which made waiting for a shuttle bus not at all unpleasant. 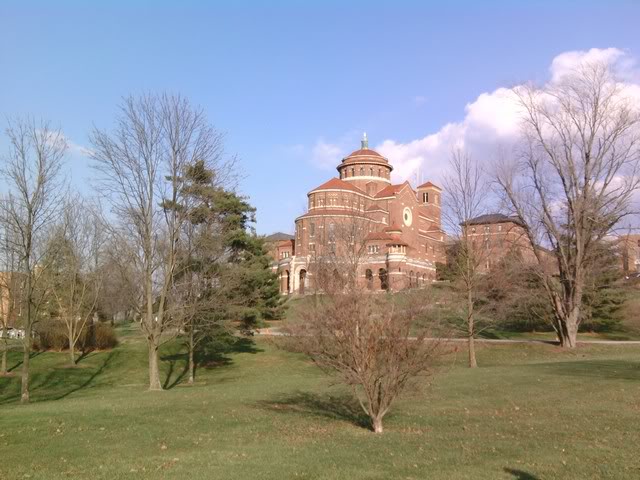 Most spectacular (to me, anyway) was the town's centerpiece: the Sisters of St. Benedict Monastery Immaculate Conception, a 19th-century but thoroughly modern convent perched high above the town and open to the public. We got the guided tour from Sister Catherine, who was very patient with and amused by our, um, rambunctious boys.

I've been in cathedrals, including Notre Dame de Paris and some others in Europe, but you tend to forget how awe-inspiring many places of worship truly are. The sanctuary was breathtaking. I couldn't help but think how truly awesome it would be to attend a mass there.

By the end of the day, feeling utterly Germanic, I was convinced we absolutely had to make the trip to Jasper to eat at Schnitzelbank, a more-than-authentic German restaurant. When we were kids we used to go here from time to time when visiting our grandparents, so I was really looking forward to it. Even better, our kids actually ate their food (a schnitzelburger, no less), which is a rarity when trying something new and I was anxious it would be a waste of money. I had the goulash and enjoyed it very much. After dinner we took a walk on Jasper's riverwalk.

So it turned out to be a long, exhausting but good day, and a good introduction to the holidays. Auf Wiedersehen!